In an effort to reach a new target audience, Rigidized Metals was looking to reposition their textured metal panels for interior applications with a new brand identity. Rigidized asked OtherWisz to come up with a name that would stand alone and appeal specifically to the interior market. Since interior products are used for different purposes than the exterior and industrial applications, it was determined that the mood of the new brand would be focused differently in order to stress the aesthetic appeal of the product line. With that in mind, we were looking to create a brand for their interior wall panels that is modern and complimentary to Rigidized’s other products: RigiGrip®, Contrarian Micro Textures, Vipertex®, etc.

During the naming process, OtherWisz went through hundreds of ideas before reaching a logical conclusion. Together, our team synthesized different options during brainstorming sessions and edited extensively in critiques. We then identified several potential names that were aligned with Rigidized’s brand architecture and target audience. After narrowing down our choices, the next step was to vet our list of names, performing a competitor analysis and double checking for trademark availability. The goal of our brand development and naming strategy was to differentiate the new line of products from competitors with a distinctive new name. In the end, the client selected the name TXTRWall, a modern, abbreviated form of “texture wall’.

Designing a stylized logo for the line of interior panels

After the naming process was finished, the OtherWisz designers worked to design a logo for this product line. The TXTRWall logo was developed as a wordmark that uses a stylized typographic treatment with custom adjustments to evoke Rigidized’s signature patterns. The logo plays off the first word, TXTR by representing and abstracting their 6WL pattern. In the negative space between the textured bumps, we noticed a strong similarity to the ‘X’ used in the TXTR Wall logo. The textured metal patterns the company is known for is loosely reinterpreted with a custom wordmark, striking the right balance between legibility and style. The custom type is paired with a complementary sans serif with a large width.

The importance of presenting logos in context

With a selection of logo options prepared for the client to review, we decided to show Rigidized how we envisioned their new assets in use. To align with our vision for the interior product line we created a mockup of an ad in an architecture magazine. The fake ad features the TXTRWall brand alongside a photo of Rigidized’s interior panels from the New York City Javits Center. The product is featured in a high traffic public space where the product’s beauty is put on display to match the contemporary building’s modern aesthetic.

With the launch of the new Rigidized website in the Spring of 2020, the TXTRwall logo received it’s official debut to the market. Read more about the Rigdized Metals website on our website. 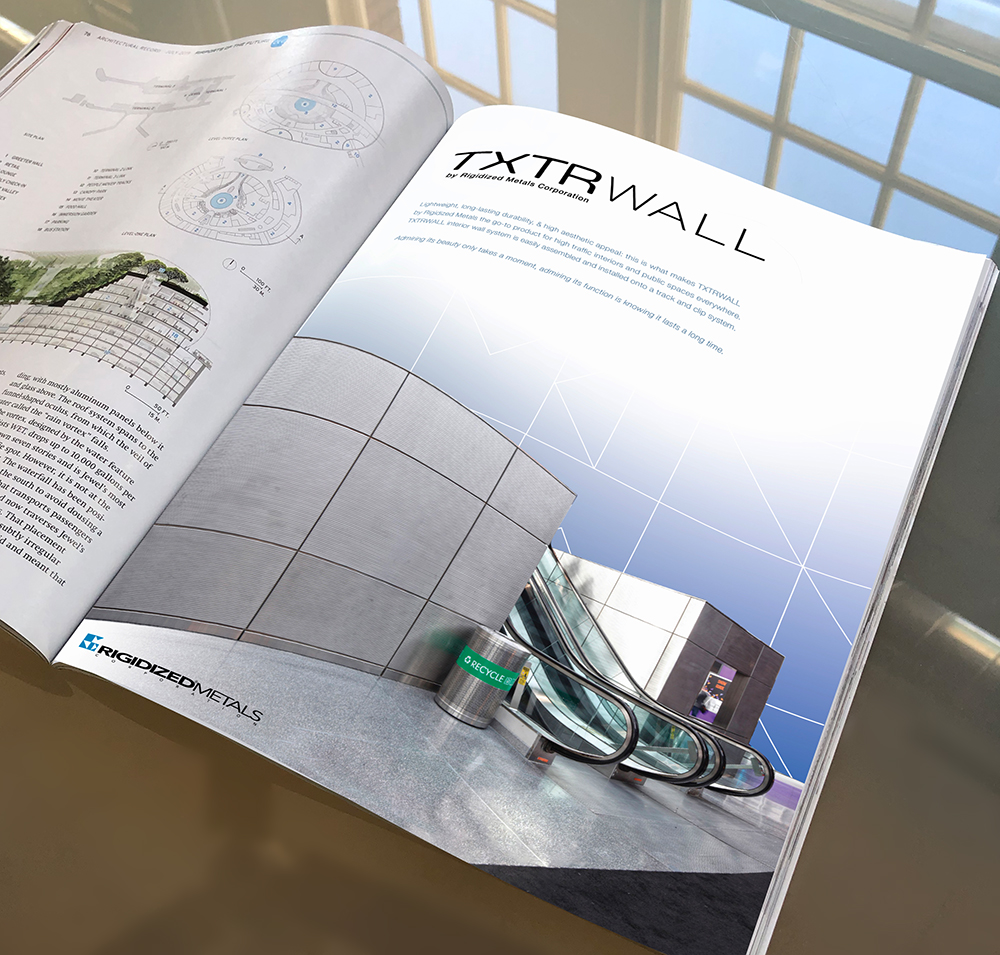 An ad mockup for the TXTRWall logo was created to show our client the logo in context.