A post-industrial city like Buffalo, NY has plenty of tales to tell. Buffalo is full of restored historic buildings that stand as monuments to the city’s heritage. The OtherWisz team has designed serval indoor murals to commemorate the history of these spaces: graphics for The Terrace, The Forge on Broadway, and Westminster Commons have all been provided with visual narratives for the spaces they occupy.

The Terrace restaurant overlooking Hoyt Lake in Buffalo’s Delaware Park has a location with considerable historical significance – it lies within the site of the 1901 Pan American Exposition, the famous world’s fair that drew millions of visitors to the city that year. Upon entering the venue, visitors are greeted by a large 6 foot tall ‘Buffalo-man’ mural that makes an immediate impression and adds to the historic ambience of the room. The mural was recreated from an antique local tourism postcard dating to the same era as the Exposition. Our team enlarged a small 5” illustration and reproduced it as a oversized 6’ x 7′ wall graphic, direct-printed on a wallpaper-like material and installed on-site. 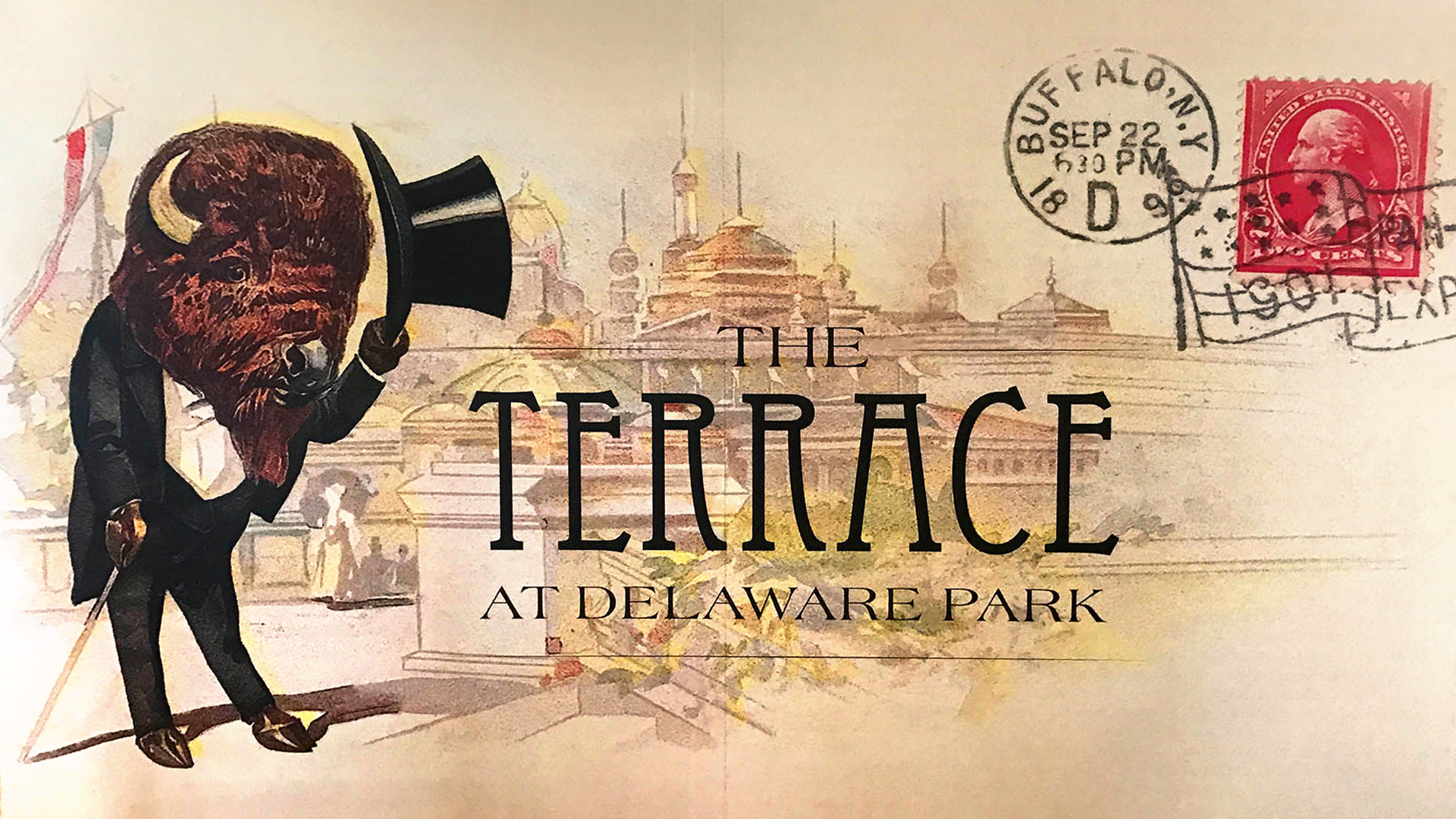 The Forge on Broadway

The Forge on Broadway is a new housing and retail development on the East Side of Buffalo, built on the site of the former Buffalo Forge factory. Founded in 1878, the Buffalo Forge was one of the leading manufacturers of forges, fans, and air handling equipment for blacksmithing. Our plan was to infuse the building’s aesthetic with the industrial history of the original facility. After several months spent researching, acquiring and digitizing images from primary source material, we established a visual language for the new Forge apartments that retains the spirit of the site’s industrial past, but is also modern enough for this new build.

79 murals totaling 3,095 sq. feet were designed and installed at The Forge, including hallway graphics for wayfinding and feature walls in key gathering spaces. Walking into the lobby, visitors are introduced to some local history with a 2-story high (approximately 24’H x 20’W) mural featuring a stylized vintage street map of the City of Buffalo. As you travel the building, slivers of industrial graphics taken from old Buffalo Forge diagrams and manuals – rendered in fresh, bright colors – help to add a historic quality to the brand-new interior. 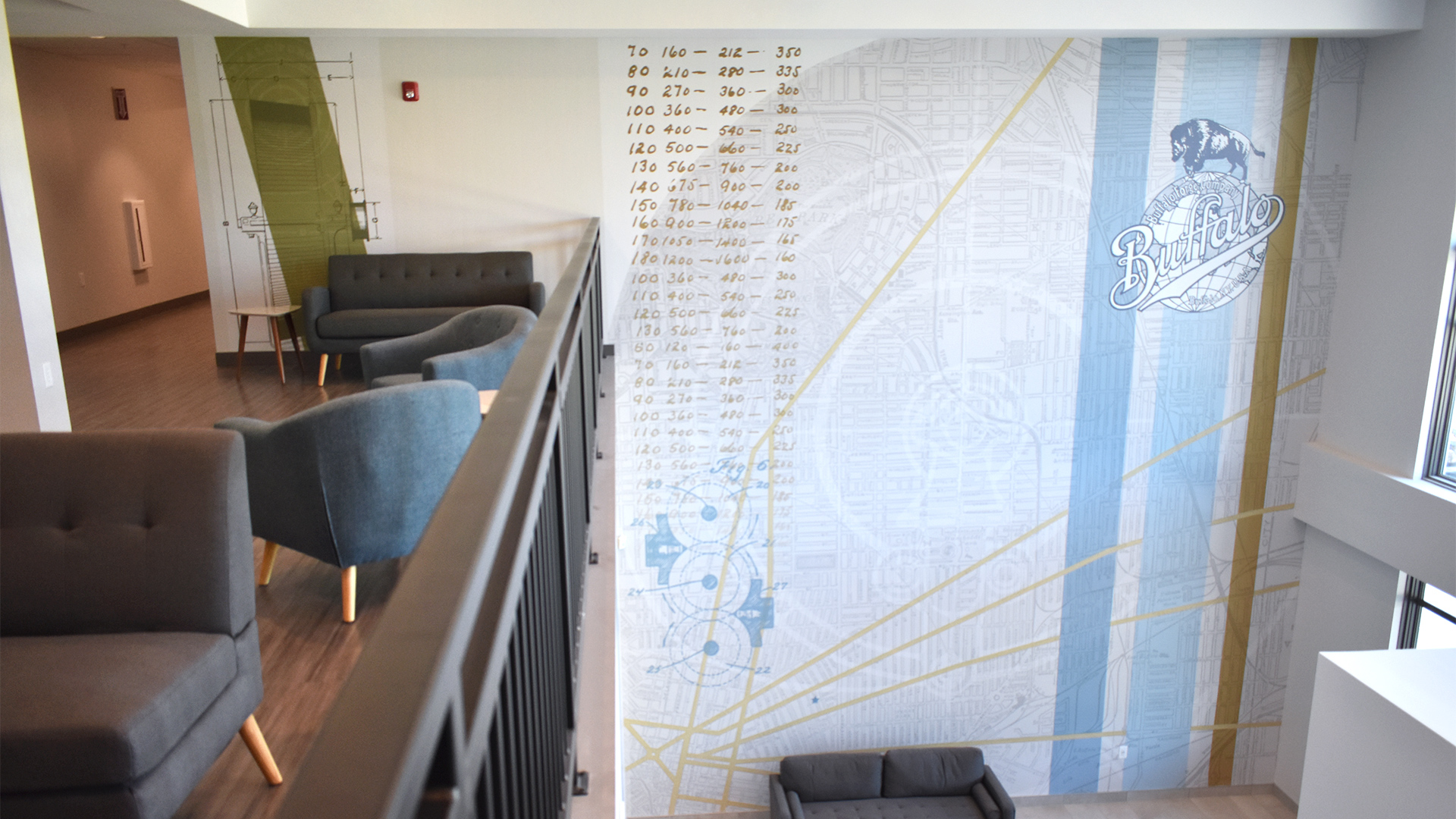 Wall murals designed for The Forge on Broadway apartments celebrate the site’s history as the historic Buffalo Forge.

The Buffalo Federation of Neighborhood Centers

For our latest environmental design project, we were tasked with developing wall graphics for the Buffalo Federation of Neighborhood Center’s (BFNC) recently renovated Westminster Community House, which was their original headquarters. Founded as part of the 19th century Settlement House Movement, the organization has provided comprehensive human services since 1893 to help ease the burden of people living in low-income and disadvantaged neighborhoods. The mural we designed for the BFNC centers around enlarged vintage photos taken from this 100+ year span that show their growth and celebrate diversity in the community over time. 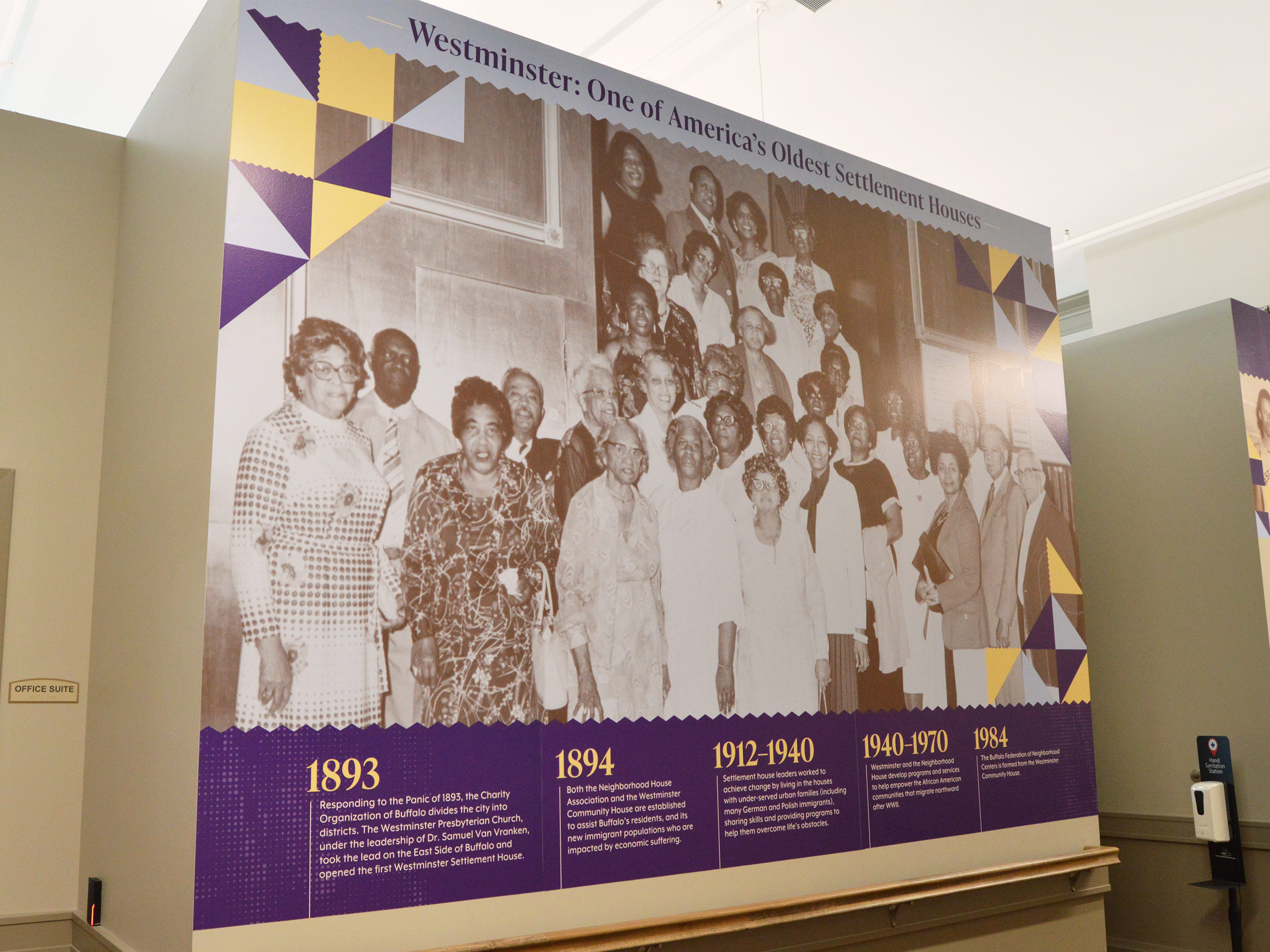 The center panel of BFNC’s Westminster House mural includes a timeline of the group’s history.

Throughout the 1900s, the Westminster Community House provided a safe haven for German and Polish immigrants struggling to adapt in an unfamiliar country, and for African Americans who migrated south during WWII. This is consistent with Buffalo’s reputation as a melting pot of different ethnic groups, with a sizable immigrant population. Our mural design evokes this ‘cultural quilt’ by incorporating the square and triangular blocks commonly used in the craft – also a traditional storytelling device across many cultures – which help to unite the photos within each panel and across the three adjacent walls. 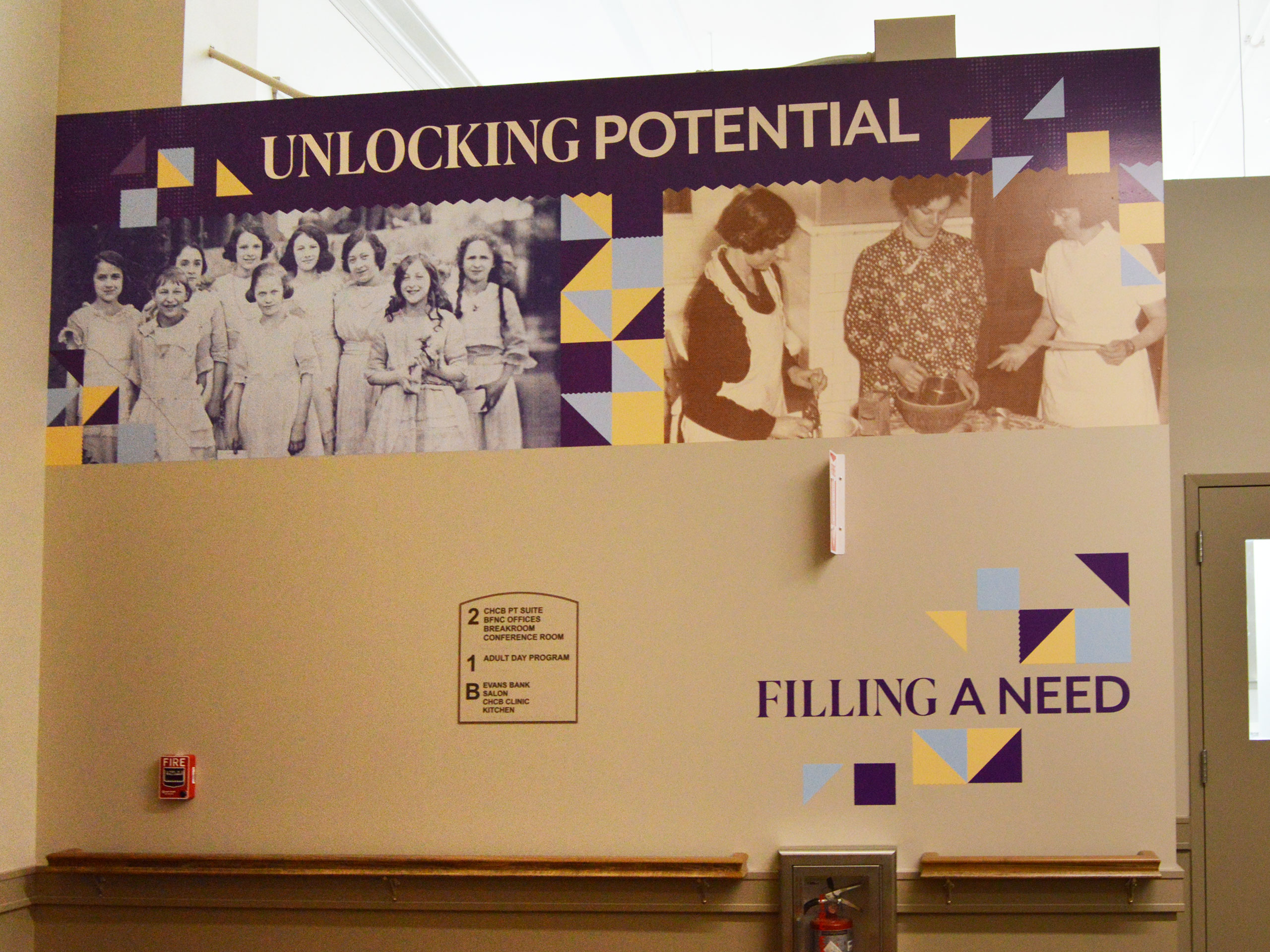 The left wall of the mural uses older photos from the late 1800s and early 1900s.

The mural uses the walls of the office to establish a triptych layout designed to be effective in the tall, narrow space it inhabits – both for people on ground level and for those in the elevated conference room that sits across the hall. On the center panel, visitors can view a timeline of important events in the BFNC’s history to learn more about how the organization came to be. On the whole, the mural complements the BFNC visual brand through its color palette and typography. 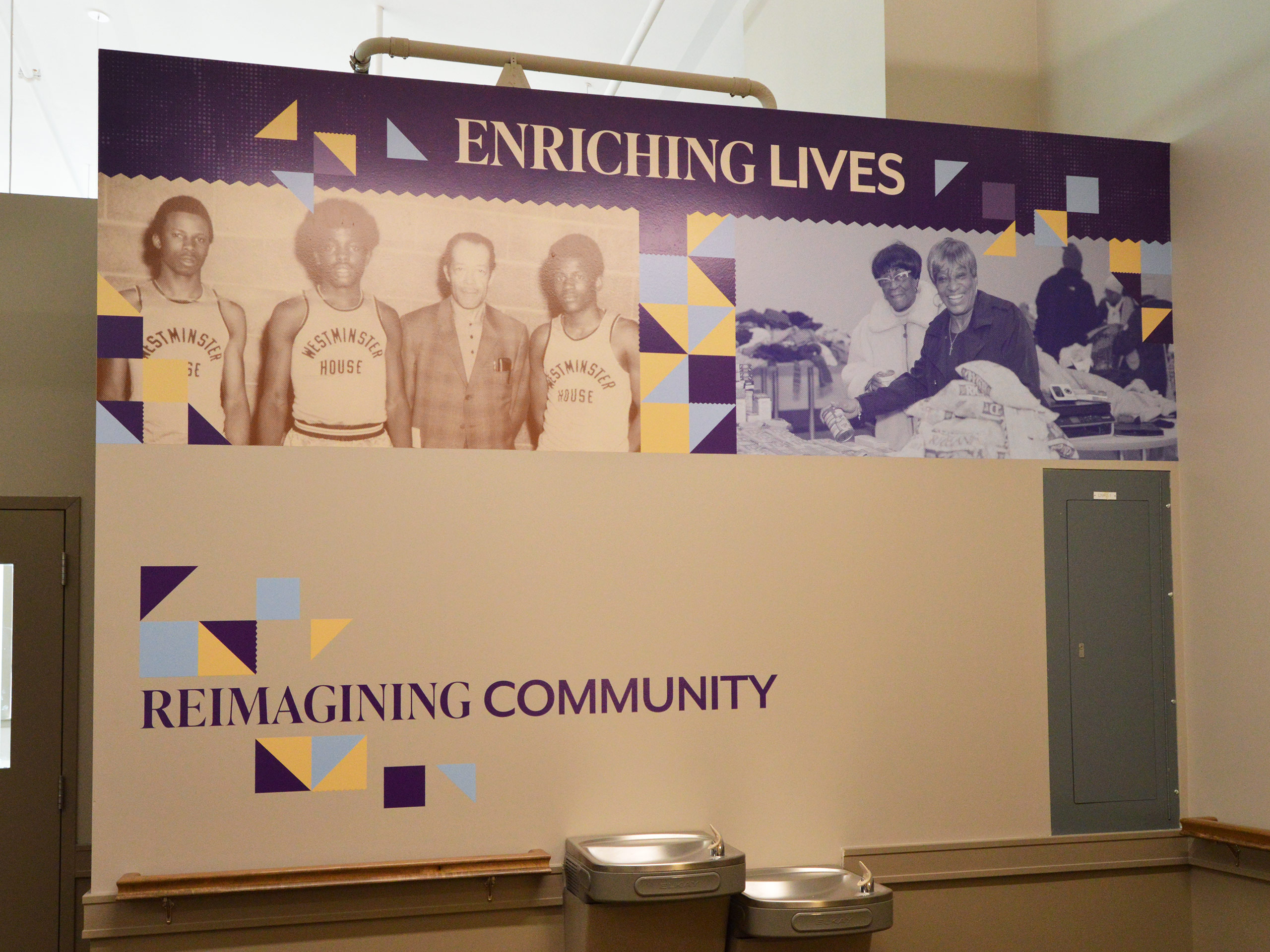 As is true for The Forge on Broadway and The Terrace, the new wall mural at Westminster not only adds visual interest to the room, but serves to introduce visitors to the history of the location using a dynamic visual presentation. On all three of these projects, our team of experienced designers were adept at telling the story of Buffalo’s historic buildings in a way that is informative yet pleasing to the eye.

Are you looking for a wall mural custom-designed to perfectly suit your space – new OR old? Call OtherWisz at 716.882.3803 and find out how our team can help.

Return to the OtherWisz Creative blog

Ready For The Show: OW delivers on event marketing materials in less than 2...